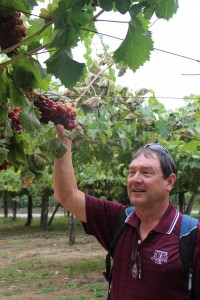 Valparaiso is the second most important port in Chile. Back in the day it was even more important because before the Panama Canal went in, it was a major port of call for those rounding South America. There are 4 universities in the city making the city quite Bohemian according to our guide. There are 42 hills in the city and each one is a neighborhood. We did some walking in these hills and they are quite steep. Valparaiso is a UNESCO world heritage site. The Chilean congress is in Valparaiso. They moved here after Pinochet to help decentralize the government. The president is still in Santiago. Valparaiso is older than Santiago. Overall the whole country feels new.

The Pacific near Chile is very cold because of the Humboldt Current – a fact I would test later on in the trip.

The next winery we visited was the Matetic winery. This winery has a total of 1000 hectares planted -150 in the San Antonio valley and the remainder in the Casa Blanca valley. This winery makes about 300,000 bottles per year. They export 70% of their production. 60% of their production is white wine. They are organic and bio-dynamic. In fact, most of the wineries we visited said they were bio-dynamic. They use chickens to control worms in the vineyard. This San Antonio valley is relatively cool and thus they grow primarily grapes for white wine. Frosts are rare though and they are only 18 KM from the coast. Harvest starts in March and runs about 3 months with 50 to 60 people working that season.

They macerate the grapes for 5 to 7 days at 5 to 10 degrees C before beginning fermentation. Fermentation is 5 to 10 days at 29 degrees C. The must is punched down during both maceration and fermentation. After fermentation it is off to 100% French oak barrels for 14 to 21 months held at 14 to 16 degrees C and 75 to 80 % humidity. All the wineries seem to be using misters to keep the humidity at the desired level because the relative humidity is pretty low in country. Barrels are used 4 to 5 times then sold off. Barrel sizes ranged from 225 to 400 liters. They also had one 1600 liter barrel which is used for a really light oak taste. Chardonnay is aged in barrels for only 10 months and other whites are only kept in stainless steel vessels. We had a big lunch (again) at the vineyard including a salad bar and servings of grilled chicken, pork and beef and then a fruit and desert bar. The gardens at this winery were particularly nice and we all took the opportunity to stroll the grounds. Behind the restaurant I discovered a set of signs describing the water recycling on the property. I gathered that they are a zero discharge facility and treat their waste water through vegetated ponds, filtration, chlorination and UV treatment before reusing. Naturally they are bio-dynamic too.

We drove through the town of Casa Blanca, which is about 25,000 people – we saw a number of Huaso here too. Most of Chile is Catholic and there is a cathedral dedicated to the Immaculate Conception.

Here in Casa Blanca that draws lots of pilgrims for the feast of the Immaculate Conception on December 8th. From the 7th to the 9th thousands of pilgrims walk to the cathedral from as far away as 40 KM. They even close the highway we were on during this time to accommodate the pilgrims.

In many places during our travels we have seen both eucalyptus and American pine trees planted. I was told by one of our interpreters that there really isn’t much of a commercial value for the eucalyptus and they are primarily used for decoration and a wind break. They grow really fast which is the primary reason for their use. I gather they have become somewhat invasive as well.

Both Casa Blanca and Vina del Mar are part of greater Valparaiso with over 1 million people overall. Valparaiso is an abbreviated version of va al paraiso – “go to paradise”.

We are staying at a beautiful hotel right on the Pacific – the Sheraton Miramar at Vina del Mar. After visiting the famous flower clock and then along the coast northward including a visit to an old castle with a clothing museum in it, we went to a Spanish restaurant for dinner and wine. I had the paella.

We went to the home of the poet Pablo Neruda, now a museum – one of 3 that he owned. He was a Nobel Prize winner in the 70’s. His home in Valparaiso is 5 steep stories with winding narrow staircases stacked like a tree house and overlooking the bay. This house is the antithesis of an ADA compliant home. The house is called La Sebastiana.

The Pacific near Chile is very cold because of the Humboldt Current. After we got back to the hotel, three of us formed a pact to swim in the Pacific. Paul, David and I exited the hotel wearing bathrobes and strolled down to the beach. The locals gawked. After we mustered our courage, in we went and man was it cold! After a very brief swim we scrambled to the beach and Paul faked a drowning and we faked attempting a rescue. We hit the pool after the beach and the pool actually felt fine. Here the dynamic trio showed off our synchronized swimming routine.

Dinner this evening was at Chez Gerald. After the meal, Fuzzy played the piano and we danced. The locals didn’t know what hit them.

Fuzzy singing with a street artist

Clothes and shoes in Chile are mostly imported as are appliances and electronics. Cars are not manufactured in Chile either and most are imported from Brazil, India and China. You can buy a Chinese made car for $6000 US! Overall food is expensive – especially meat and seafood. Over 40% of Chilean women work – which is still the lowest in Latin America. The lowest salary (remember that Chile is a socialist country) is $420 per month and the average salary is $1300 US/ month. Government deputies and senators can make up to $15,000 US per month. 12% of income goes to the pension fund. Women can retire at 60 and men at 65. They get a regular pension until 84 and then a “special pension”.

The first winery is Casas del Bosque – literally “Houses of the Forest”. The winery started in 1993 and has about 1200 acres. They grow Pinot Noir, Shiraz, Riesling, Carmenere, and Cabernet Sauvignon. They have no free flowing water and so use wells for irrigation. This is obviously a very new and modern winery and they have beautiful architecture in the tasting room and in the outdoor spaces, including wonderful views of the vineyard from this elevated space.

The second winery we visited was Vina Mar which began in 2004. They are in the Casa Blanca valley close to the Pacific. It is relatively cool and foggy in the morning and the location is best for growing white wine grapes. 70% of production is sparkling wine. They grow Sauvignon Blanc, Chardonnay and Pinot Noir. They make 2 million liters of wine and export 90%. Harvest is March through May and they hand harvest. It can frost here and they use water mist to control.

After the tour we had a beef Carpaccio salad, fruits, and then a huge chunk of beef on cream corn. After lunch the wait staff put on clown hair and passed around the bottom of a chicken for us to put tips into.

We had dinner at the El Apero (stirrup) restaurant which specializes in typical Chilean foods. The restaurant is located in the Borde Rio area (Rivers Edge) and has restaurant after restaurant sort of stacked together. I finally got to try Hummitas here, thanks to Paula making a special request for me. This is an all vegetarian version of a giant tamale and is kind of like eating a giant portion of cooked masa. It was quite good but much more than I could eat. There was a song and dance troupe here for entertainment, first with typical Chilean folk dancing then with Rapa Nui dancing. Paul and I got selected to participate in the dancing with the ladies and then Merrill and Diane got selected to dance with the men. It is amazing what wine and pisco will enable you to do. After thoroughly embarrassing ourselves and the rest of the restaurant, we returned to the hotel.