Sagrantino, A Taste of History

Undulating hills of green velvet checkered with a corduroy texture olive groves and vineyards are the canvas of the Montefalco experience.  The horizon is only broken by stately Italian Cypress trees, mountains or periodic villages.  Narrow roads wind aimlessly from hillside house to hillside house.  Some are paved and others not.  GPS does not know all of the roads but they connect one village to another so you never feel lost.

Every hilltop is capped by an ancient town or monastery. Many are mint condition living museums.  Montefalco is one of many but it boasts a unique heritage of wine whose roots are now connected to Texas.

A native grape of Montefalco called Sagrantino “sacred wine”, was used to make a sweet wine called Passito.  Records show the wine as early as the 1500’s.  In the mid 70’s winemakers began experimenting with dry styles.  The Sagrantino grape has very bold tannins requiring many years of aging to soften.  Today most producers make a Montefalco Sagrantino which is 100% of the grape; a Rosso which is blend; and a Passito.

Having been introduced to Sagrantino in 2012 when Paul and I were teaching Wine Tourism for Wine Pleasures in Perugia, we were impressed by the boldness of the grape and the resultant wine.  It was hearty like Texans and seemed to thrive on heat and soils similar to ours.

Once back in the states Paul found Sagrantino rootstock available in California.  In 2013 we planted vineyards in Lamesa and Brownfield, Texas. We began planting in 2014 at Messina Hof Estate Vineyard Brazos Valley.  Our first vintage of Sagrantino was 2016.

Today if you visit Montefalco there is an organization to pave your way!

La Strada de Sagrantino will not only help you with your reservations at the wineries but they have a weekly tasting with a Sommelier to introduce you to the wines of Montefalco.

We visited a great group of wineries: 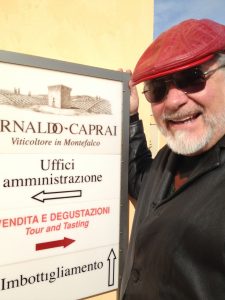 For your dinners, we give you the contact of the restaurants we visited:

Umbria is a city cloistered in a wall and in history.  Standing in the town square you cannot tell in what century you walk.  The Sagrantino wines are a taste of history. 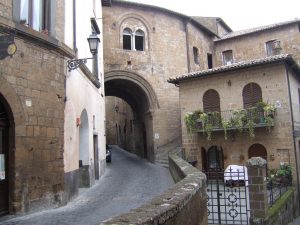