Intellectual wines are wines that are too much work to understand.  It requires breathing, aeration, much contemplation to grasp the full character of the wines.  Villa Minna makes such wines.  The wines are subtle with delicate aromas, a distinctive minerality, well-aged balance, and defined vintage differences.  From 15 hectares of estate vineyards located in the South of France between Aix-en-Provence and Salon de Provence, owners Minna and John-Paul Luc, produce 25-30,000 bottles per year.   The organically grown grapes are hand harvested and wines are produced with natural yeasts and natural malolactic fermentation. 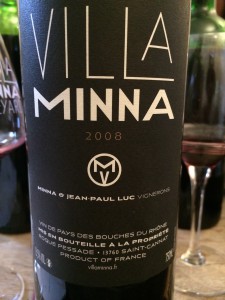 Winemakers and grape growers tend to be a very independent and pioneering breed.  You must have a passion for the vine and the wine in order to be successful.  Minna and John-Paul showed such a nature long before they discovered wine.  John-Paul shared that he was an international Formula One race car driver who started with Michelin and Renault a driving school in Steamboat Springs Colorado in 1983.  He ran that school for 11 years.  Minna was a free spirit from Finland who was hitchhiking when a kind race car driver named John-Paul, who was in Finland to race, offered to give her a ride.  Love, adventure, and desire to care for his deceased grandfather’s land took John-Paul back to the farm.  Together they cleared the land and planted selected grape varieties in 1992.  Minna accepted the challenge of learning winemaking.  The first vintage was 1999 which earned immediate 2 star recognition by Hachette.

Family and tradition are written all over the wines.  Today John-Paul and Minna are transitioning to the next generation now.  Swedish born son-in-law Emil is studying enology and he and his sister-in-law are working in the vineyards to learn the business from the ground up.  The label art is derived from cropping of art done by daughters Tytti and Meryl when they were children giving the package a colorful modern look.

When visiting Villa Minna, get a guide or ask for directions.  The signage is minimal in France.  We took D67E outside of Saint Cannat toward Condoux.  At the stop sign, which is hard to see as it is small and attached to a building, go left.  Go several miles until you see a vineyard over the road horizon and look for a Villa Minna sign on the left.

· this was a stand alone vintage with a blend of all the red grapes in the vineyard including Caladoc, Marselan, Syrah, Cabernet Sauvignon, Mourvedre.

· Delicate nose with floral overtones with flavors of violets

· Matured in stainless steel with a blend of spare Minna Vineyard Barrels.

· It was aged 3 years in bottle before release.

· These wines are blends of Syrah, Cabernet Sauvignon, and Mourvedre

· 2009 was well balanced and had subtle aromas of spearmint and moss.

· 2007 had expressive nose, medium tannins and short finish with candied cherries and fruit in the nose

· Aged in bottle for 36 months before release.

· These wines are blends of Vermentino, Roussanne, and Marsanne.

· 2010 had a clean, crisp lemongrass nose and delicate flavor.

· 2009 was more aromatic with petrol overtones but unusually fresh and bright for the age.

· Aged in bottle 24 months before release.

Before we left we had the opportunity to taste a tank sample of 100% 2011 Caladoc.  This is an unrecognized hybrid grape of Grenache and Malbec.  It was the standout of the winery.  This wine was dark eggplant purple in color with a perfumed nose and dark fruit flavors.  Look for more of this variety in Provence.

Today Villa Minna is exported to Canada, England, Sweden, China, and Turkey and is sold to Michelin restaurants in France.  By appointment groups of up to 20 can visit the winery for tasting. It is on the Wine Trail of Provence trail.